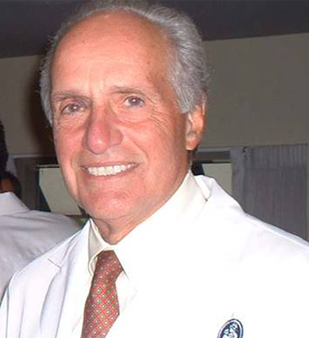 Dr. Volpe received his M.D. degree from the Harvard Medical School, completed a Pediatric residency at the Massachusetts General Hospital, carried out a postdoctoral research fellowship at the NIH and trained in Pediatric Neurology at Massachusetts General Hospital. He then served for 20 years on the faculty at Washington University in St. Louis, the last ten years of which as the Stein Professor of Neurology and Director of the Division of Pediatric Neurology. In 1990 he was recruited to Boston as Neurologist-in-Chief at the Children’s Hospital, Bronson Crothers Professor of Neurology at the Harvard Medical School, and Chairman of the Department of Neurology at Children’s Hospital/Harvard Medical School. Under Dr. Volpe’s leadership, the Department of Neurology grew to a faculty size of over 50 child neurologists and neuroscientists. The clinical and research programs became the largest and most diverse of any child neurology facility in the world.

Dr. Volpe generally is credited with having pioneered the field of neonatal neurology. His work in that field has included both clinical and basic research. The principal emphases of his clinical research have included elucidation of the pathogenesis of the major hemorrhagic and ischemic lesions of the newborn, especially the premature newborn, and prevention of this brain injury. His basic research has used several model systems to investigate the mechanisms of oligodendroglial death in premature infants and the means to prevent this cell death. He led a long-standing NIH-funded program focused on brain injury in premature infants. In more recent years he has developed the concept of the “encephalopathy of prematurity. His neuropathological studies of human premature brain have elucidated widespread involvement of both neuronal and glial elements and both injurious and dysmaturational mechanisms. He has contributed more than 300 original articles and his book, Volpe’s Neurology of the Newborn, currently in its sixth edition, is considered “the bible” in the field.

He is especially widely recognized also for his dedication to the training of academic child neurologists, and many of his approximately 100 past trainees are key figures in child neurology programs throughout the world. He also has trained approximately 60 research fellows in clinical and basic research, most of whom hold academic positions worldwide. He was awarded the William Silen Lifetime Achievement in Mentoring Award by the Harvard Medical School. He has served on the editorial boards of virtually all of the major journals in neurology and pediatrics and has delivered numerous honorary and named lectures at universities worldwide.

He has received many awards nationally and internationally. These include the two most prestigious awards of the Child Neurology Society, both the Hower Award for lifetime achievement in child neurology and the Sachs Award for scientific achievement. He has been similarly honored by academic societies of child neurology, cardiology, neonatology, radiology and neurosurgery worldwide. In 1997 he was elected to the Institute of Medicine (now, National Academy of Medicine) of the U.S. National Academy of Sciences. The Boston Children’s Hospital has created the Joseph J. Volpe Chair in Neurology. Currently he is the Bronson Crothers Professor of Neurology, emeritus at the Harvard Medical School.