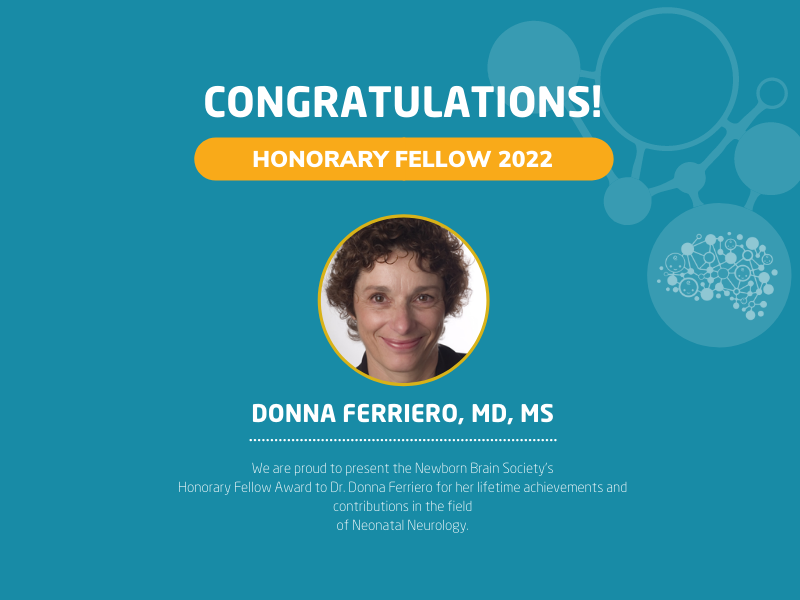 Board of Directors and Steering Committee, Newborn Brain Society info@newbornbrainsociety.org

Dr. Ferriero is the Emeritus Professor of Neurology and Pediatrics at the University of California, San Francisco. She is also a member of the Biomedical Sciences Graduate Program and the Weill Institute for Neurosciences. Dr. Ferriero is Director of the Neonatal Brain Disorder Laboratories and former co-director of the Newborn Brain Research Institute at UCSF. Dr. Ferriero has published over 300 peer-reviewed publications. Her laboratory has been critical in defining the relationship of selectively vulnerable populations of neural cells during maturation-dependent injury. She has been continuously funded by the US National Institutes of Health since 1987.

Dr. Ferriero is a past recipient of the UCSF Chancellor’s Award for the Advancement of Women and the Maureen Andrew Mentor Award from the Society for Pediatric Research. She is Past-President of the Child Neurology Society and the American Pediatric Society. She is the recipient of the 2000 Sydney Carter Award for excellence and leadership in Child Neurology and was elected to the National Academy of Medicine in 2005. She received the Royer Award for Excellence in Academic Neurology in 2007 and the Willis Lecture for outstanding contributions to stroke research in 2010. She was elected to the Association of American Physicians in 2011 and to the American Academy of Arts and Sciences in 2013. More recently, she is a co-founder and the chair of the steering committee of the Newborn Brain Society. Her legacy will continue to inspire, help, protect, and encourage experts, students, and patients for years to come.

Donna Ferriero’s lifetime of commitment to the field of neonatal neurology has earned her the 2022 Newborn Brain Society’s Honorary Fellow Award. This prestigious award will be given to qualifying contributors in the field of newborn brain care.